“I’m no pacifist,” I hear people say, with great fervour. “I tell you, if someone was coming after one of my kids with a knife, I wouldn’t be turning the other cheek!”

It’s probably the most visceral objection to pacifism, and it’s certainly a question pacifists need to wrestle with. How would we respond to violent aggression against someone we love?

I’ll get back to the question, but here’s the thing: when we make this our objection to pacifism, it demonstrates we’re thinking about pacifism entirely in the wrong way.

What do I mean by this?

First, the best of Christian pacifism is not just about individuals and each person’s response to violence, but also—in a way, even more—about groups and communities and societies and nations, and our collective attitudes toward violence and use of violence. Yes, collectively we are made up of individuals, and the values we cultivate as individuals will influence or even become the values we insist on as groups. But when we make pacifism into merely a private matter—my own individual response in the face of personal violence against me or mine—we miss the broad scope of the peace God desires for the world. 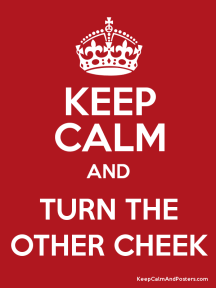 In fact, Christian pacifists don’t agree on what one should do in our extreme hypothetical scenario above. In saying “Turn the other cheek,” was Jesus speaking only about violence against ourselves? Or would Jesus allow us—or even expect us—to intervene when violence is being committed against someone else? Or, pushing further, in saying “Turn the other cheek,” was Jesus even calling for a passive acceptance of violence against us? Or was this perhaps an illustration of creative resistance—non-violent, yes, but resistance nonetheless—against violent oppressors, taking the sting out of their oppression by maintaining one’s composure, one’s dignity, one’s principled stand, even directly in the face of their attempt at subjugation?

And this leads to a second feature of the best of Christian pacifism: it’s not passive at all, but active. Pacifism is not passive-ism. It is intentionally, creatively, radically active. And it’s not primarily negative—against war, against violence—but positive—it is for peace, it is for justice. The best of Christian pacifism works to create the conditions in which peace and justice can flourish, and it works to resolve conflict and address injustice when peace and justice are floundering. But it does so in the way of Jesus, refusing to play the same game as the oppressors, where coercion and deception and violence are the game’s unwritten rules.

This is no thin view of pacifism. It looks beyond my world to the world around me, encompassing my family, my community, my society, the global village, the entire cosmos. It demands more of me than just a non-response in an extreme situation that, thankfully, few of us in North America will ever have to face. And it reflects much more than just a few red letters of Jesus’ teaching in our Bible—it reflects the larger purposes of God throughout the Scriptures, God’s greater gospel, God’s wider kingdom.

So what would I do if someone was coming after one of my kids with a knife? I don’t know. I don’t think anyone can know until they’re faced with this. And none of us can stand in judgment on those who have faced such a situation and acted in a way different than our ideals. But I pray that if possible I would be able to resolve things with no harm done to my child, the aggressor, or myself; and if that is not possible, that I would die protecting my child—one whose angel stands in the presence of God—from harm (Matt 18:1-10).

This response, though, while shaped by my pacifist ideals, is not the sum total of my pacifism. In a way it hardly scratches the surface of my pacifism; in a sense it’s not even the best reflection of it.

It’s only the thin edge of a much larger, much wider, much more comprehensive striving for a greater peace throughout God’s Christ-loved, Spirit-haunted world.