This past weekend I hosted my seminar on Jesus in history called, “Was Jesus Married? …and other awkward questions.” (The answer to that one, by the way, was, “Almost certainly not—though it is not historically impossible, and shouldn’t be theologically problematic.” Can you say, “can of worms”?)

But one of those other “awkward questions” was this one: “Was Jesus actually a violent revolutionary (and not a peacenik)?” As I conceded in the seminar, a good prima facie case can be made for Jesus’ revolutionary tendencies.

Those tendencies were undeniably “in the air” in Jesus’ day. There was a proud history of zeal for Torah among Jews of Jesus’ day, including for some a willingness to do violence against foreigners and even fellow Jews in order to uphold “righteousness” according to the Law of Moses. There was also a “zealot” movement that developed against Rome that had roots going back to Galilee in the early first century A.D., right where and when Jesus grew up.

And then there’s what Jesus himself said and did. Jesus proclaimed the imminent kingdom of God, a reality commonly understood as a political kingdom that could well require military effort to bring about. Jesus said things one could interpret as promoting violence, things about bringing and buying swords. Jesus entered Jerusalem in messianic procession and caused a disturbance in the Temple. And to top it all off, Jesus was crucified by Rome, probably for treason.

So, at first blush, the idea of Jesus as a wannabe revolutionary can seem pretty compelling. However, it collapses under the cumulative weight of a host of sayings and deeds of Jesus.

Jesus’ ethical teachings, such as in Matthew 5-7, and his mission teachings, like those in Matthew 10, are among the best attested teachings of Jesus we have. We find many of them in both Matthew and Luke in slightly different versions, we see them reflected in Paul’s writings before the Gospels were even written (e.g. Romans 12-13; 1 Corinthians 9), and we hear them in other early Christian writings of the first century (e.g. James 5, Didache 1). 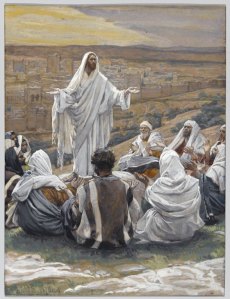 It’s in these teachings that we find Jesus’ strongest words of peace and non-violence. “Love your neighbour,” “love your enemies,” “do not hate your brother,” “turn the other cheek,” “bless those who persecute you,” “blessed are the peacemakers,” and more are found in his ethical teachings, all connected to the “kingdom of God” which we are to pray for and to seek first. Among his mission teachings are calls for Jesus’ followers to proclaim God’s kingdom and heal the sick, giving freely and living simply. If they are rejected they are not to retaliate but simply to “shake the dust off their feet” and move on, leaving the rejecters to God’s judgment.

Other teachings of Jesus may be less widely attested in earliest Christianity, but fit snugly within these basic contours. Jesus’ kingdom parables, for example, repeatedly emphasize the idea that God’s kingdom does not come about suddenly—by force, you might say—but is planted in the world and grows quietly and slowly until its fruition. Or, for instance, Jesus’ controversies with religious leaders include the famous “Give to Caesar what is Caesar’s, but give to God what is God’s”—a recognition of human authorities in this age, yet a declaration that God holds our ultimate and total allegiance. And running through the Synoptic Gospels is a recurring focus on the “least,” the “last,” and the “lost” as who God’s kingdom is for, as those who inhabit God’s kingdom—not the powerful or mighty but the meek and the humble, not the violent and coercive but the gentle and those who serve.

All told, the whole thrust of Jesus’ teaching is that God’s kingdom—God’s universal reign of justice and peace—is being established on earth, brought about through his, and his followers’, self-giving, suffering love for the other. This involves both love for God and for other people, including love for those marginalized among us and for those deemed to be hostile to us.

Jesus’ actions were fully in line with these teachings. One of the regular activities of Jesus widely acknowledged among historians is his practice of “communal meals.” These he viewed as symbolic of God’s kingdom, and the guest lists included repentant sinners, the socially marginalized, and other outsiders—the “least,” the “last,” and the “lost” who inherit God’s kingdom. Likewise, Jesus’ healings—he was certainly acknowledged as a healer, even if his opponents questioned the source and legitimacy of his healings—were also seen as signs of God’s kingdom, and focused on things like mercy over strict Sabbath observance, compassion over ritual purity, and inclusion of the marginalized in God’s kingdom.

Then there’s Jesus’ suffering and death. At least some early Christians viewed Jesus’ death as the crucial event for establishing God’s kingdom on earth (e.g. Mark). Certainly the manner of Jesus’ suffering and death reflected the teachings he had given—he walked the talk. He “turned the other cheek,” standing up to the powers that be and refusing to retaliate, thus exposing their violence and injustice for the evil that it was. He gave himself for the good of others, even through extreme suffering. He modeled the love he commanded.

The overwhelming portrayal of Jesus in our earliest and most extensive sources is that of one who proclaimed and lived out a counter-cultural kingdom of God—one not characterized by violence, but by non-violence, even active peacemaking.

What do we do, then, with the few anomalies, those sayings and actions of Jesus that don’t seem to fit the mould? Well, let’s take a closer look.

The “I have not come to bring peace but a sword” saying (Matt 10:34-36) is part of Jesus’ mission teaching, instructions for his disciples as they preach the gospel and heal the sick. “Sword” here is used figuratively to describe the turmoil that will result from Jesus’ kingdom message and way of life. His point—evident from the surrounding context of this statement—is simply that his kingdom message and actions will provoke resistance from the world, so his followers should be prepared for this and persevere through it.

What about “Those who do not have a sword should sell their cloak and buy one” (Luke 22:35-38)? Jesus has just alluded to his previous mission teaching, but now intensifies it: this is, once again, a warning about coming resistance to Jesus’ kingdom way. That Luke understands the particular statement as figurative is evident from the way the narrative continues. First, Jesus responds to the disciples that two swords is “enough”—rather ludicrous if Jesus was speaking literally about arming themselves either for rebellion or for defense. And second, when the disciples ask about literally using the sword to fight the mob and one of them cuts off the ear of the high priest’s servant, Jesus responds with “No more of this!,” heals the man’s ear, and says, “Have you come out with swords and clubs as if I were a lēstēs (brigand, revolutionary)?” (In other words, “I’m not a lēstēs, people.”) Matthew’s account gets at the gist of Jesus’ real feelings about this, stripped of all irony: “Those who live by the sword will die by the sword” (26:52).

Then there’s the “temple cleansing,” as it is often called. Yes, Jesus does exhibit violence here, something that should caution us against an unrealistic ideal of non-violence. But it’s important to temper that concession with a few other thoughts.

First, none of the Gospels indicate that Jesus committed physical violence against human persons—only John describes the “whip,” and he states this was used to “drive out” the animals. Second, scholarly consensus is that Jesus’ temple action was symbolic and prophetic, like the symbolic-prophetic actions of Ezekiel, for example. Jesus was not realistically going to stop the temple sales of animals with a one-man temple tantrum, but he could symbolically highlight the problems he saw and prophetically pronounce God’s judgment. And third, this action was motivated by a desire for justice and inclusion in the face of injustice and exclusion. Poor Jews, especially non-Judeans who had traveled from around the Empire, relied upon the animals sold in the temple courts for their sacrifices. The temple merchants, it seems, were taking advantage of their situation, keeping the temple from being a “house of prayer for all nations.”

It’s important to note that none of this makes Jesus into a modern pacifist. You don’t hear any prohibition of military service from Jesus even when interacting with Roman soldiers—in this he followed the example of John the Baptist (we Mennonites need to pause and reflect on this more). He doesn’t organize his followers toward collective acts of protest or resistance against the powers that be or their acts of violence. He doesn’t develop a program of restorative justice in contrast to the retributive models of justice around him. He doesn’t establish hospitals or schools in war torn areas in order to build a peaceful society.

Nevertheless, Jesus was a thoroughgoing peacenik—and his teachings and example provide the building blocks for a robust, active Christian pacifism that includes all these things, and more.