The Parable of the Good Samaritan.

Everyone knows the story. Or, at least, they know what a “good Samaritan” is. It’s someone who does a good deed, someone who helps a person in need.

Sure, but it’s more than that. The story is actually more jarring than that. Or, at least, it should be.

Jesus tells the story to describe what “neighbour-love” looks like, what it actually means to “love your neighbour as yourself.” This “neighbour-love,” Jesus says, is vitally connected to “God-love,” what it means to “love God with all your heart, soul, strength, and mind.” The Greatest Commandment—the One Thing God asks of us, the One Thing that encompasses all things God requires—is to love God and love others.

So what does this “neighbour-love” look like? It looks like a Samaritan showing compassion and extending care to a Jew in desperate need.

Simple, right? Just your everyday good deed, a random act of kindness, the kind of thing any decent person would do. Right?

Not quite. Read it again. And then again. And again—this time with feeling. (And maybe a little context.) 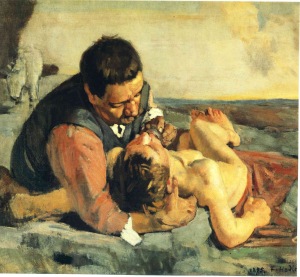 First note: As any first-year seminarian can tell you, the Samaritans and Jews in Jesus’ day didn’t really get along. Okay, that’s understatement. There’s one story of some Samaritans throwing human bones into the Jewish temple in Jerusalem, defiling it. But then again, a century before that the Jews completely destroyed the Samaritan temple on Mount Gerizim. You know, “eye for an eye” and all that. So a Samaritan and a Jew? We’re talking “despised other” here, like when Donald Trump talks about “Mexicans” or “Muslims.”

Note #2: The Samaritan shows compassion and extends care without reservation: no questions asked, no conditions to be met, no fine print to qualify the offer. He’s not concerned about his own safety and security. He’s not concerned about who’s going to pay him back. He’s not all, “Well, maybe if I help this Jew he’ll convert to my religion and come worship at my temple.” (Seriously, think about that a moment.)

A third note: The people who you’d think would most likely help the victim are exactly those who refuse to do so. A priest, a Levite. A Christian, a Canadian, a pastor. Nope. Instead, it’s the least likely person (from the Jewish perspective) who is the hero of the story, the “despised other” themselves.

Did I say “Good Samaritan”? I meant “Good Muslim.”

Now there’s an idea. Let’s try that out and see how it feels—and if this makes you uneasy, if it makes you all up-in-arms and red-in-the-face and furious with me, then maybe you’re starting to hear the story correctly.

Wanting to make himself look good, the expert in ethics asked Jesus, “And who is my neighbour?”

Jesus replied, “A man was going down from Morden to Winkler by a back road, and fell into the hands of robbers, who stripped him, beat him, and went away, leaving him half dead in the ditch.

“But a Muslim immigrant while traveling came near him; and when he saw him, he was moved with pity. He went to him and bandaged his wounds, having treated them with antiseptic. Then he put him in his own car, brought him to the hospital, and sat with him through the night. The next day he wrote a cheque worth two days’ wages and gave it to the nurse on duty, and said, ‘This is for any extra expenses he has; when I come back, I will repay you whatever more is needed.’

“Which of these three, do you think, was a neighbour to the man who fell into the hands of the robbers?”

The ethical expert said, “The one who showed him mercy.”

Jesus said to him, “Go and do likewise.”