“This is one of the things that bothers me most about straight people: the heterosexual lifestyle. They live a life of unrepentant debauchery: casual sex, multiple partners, widespread adultery, easy divorce.”

“It’s all about sex for them: they always dress so provocatively, and their talk is filled with cheap sexual innuendo—‘locker room talk.’”

“For the straight community, sex is just a marketing ploy and people are nothing more than sexual objects.”

“They get fuelled up on pornography, then they harass and abuse and rape at will. Rape culture is straight culture.”

Imagine someone saying these things about heterosexual people. If you are straight, as I am, how would you respond? How would you feel?

My first thought would be: “But wait, I’m as straight as they come, and I don’t do those things. That’s not my ‘straight culture.’ That’s not my ‘heterosexual lifestyle.’” 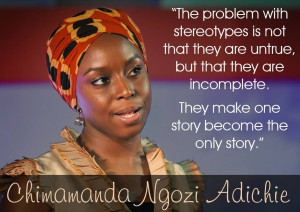 There is no one-size-fits-all “gay lifestyle,” just as there is no monolithic “straight lifestyle.” This is “the danger of a single story,” as Chimamanda Ngozi Adichie describes in a must-see TED Talk. When complex human beings and human situations are boiled down to one simplistic narrative, when “all Muslims” or “all natives” or “all gays” are painted with the same brush, we strip away their humanity and embolden our bigotry against them.

My brothers and sisters, this is not the way of Jesus.

My second thought, however, after some hard, honest reflection on this description of the “straight lifestyle,” would be: “But there is some truth to this.”

Rape culture is a reality in many settings—and it’s largely perpetuated by straight white males.

“Sex as marketing ploy” and “people as sex objects”? Heterosexuals perfected that.

And there’s no need to say much about adultery and divorce: that’s been the playground of straight men and women as long as there’s been marriage.

Of course this goes both ways. There’s no doubt that there are LGBTQ+ folks who are sexually promiscuous, who commit adultery, who exploit and abuse others sexually.

And then, also for the love of God and neighbour, let’s focus on addressing the sexual sins that are truly destructive in our lives, our relationships, and our world.

1 thought on “The Straight Lifestyle”