“Heaven” in the Bible is never used to talk about “where we go when we die.” It usually means either “the heavens” (“the skies”) or it means something like “where God is most present.” Sometimes, because of this, it is used as a roundabout way of saying “God,” as in “kingdom of heaven” meaning “kingdom of God,” kind of like how we might say, “Thank heavens!” when we mean “Thank God!”

The Old Testament moves from basically no belief in life after death, to a belief in she’ol (a kind of shadowy existence without any substance or colour), to a belief in a future resurrection of the body (e.g. Daniel 12:2, 13). The New Testament picks up on this “resurrection” idea and fleshes it out in a pretty consistent way, even if the details vary from passage to passage.

“Jesus, remember me…” Titian, Christ and the Good Thief

Immediately after death, we are with Jesus. In Luke 23:43 Jesus promises the thief on the cross: “Today you will be with me in paradise.” (“Paradise” is a Persian word that has the idea of a beautiful garden—it’s a place of bliss.) In 2 Corinthians 5:8 Paul says that when we are “away from the body” we will be “at home with the Lord.” And in Philippians 1:23 Paul talks about “departing from this flesh” and “being with Christ.”

Other New Testament passages give the same consistent message: after death we are with Jesus. There’s no more detail given than this (Jesus’ parable in Luke 16:19-31 and the vision in Revelation 6:9-11 are probably not to be taken literally as descriptions of what this actually looks like), but for Christians this is intended to be enough: after death we are with Jesus, and by extension with all those who have died “in Jesus” before us.

The ultimate end, however, is being bodily resurrected to live in a renewed earthly creation. The idea is a return to the way God originally created us to be: people with both a soul and a body, living in an earthly creation, enjoying that good creation and caring for it even as it provides for us (that’s Genesis 2:7-15). The New Testament is consistent in looking forward to this, even if it gives different depictions of exactly that might look like. This is what’s behind every future “resurrection” passage (e.g. Romans 8:18-30; 1 Corinthians 15:35-58; 1 Thessalonians 4:13-18; Revelation 20:4-6).

I believe that when I die (when my body and brain stop functioning), my “spirit” or “soul” will continue to exist. I imagine feeling a kind of “painless peace” at that moment. I imagine, maybe, a feeling of motion to another place, where I will experience a kind of “waking” in a place suffused with light, as if the light oozes out of everything around me. That feeling of “painless peace” continues, but now is added a feeling of being deeply, perfectly loved, and being intimately connected to everything around me. I imagine, then, in this “place” being reunited with my loved ones who have died—a joyful reunion!—and seeing Jesus for the first time face to face—like coming home after being away for a very long time.

At some point—it might feel immediate, it might feel like time has passed—I believe that God will complete the renewal of creation that Jesus has begun and we have continued. Exactly what this looks like, I’m not sure, but I imagine this same world, this very earth, within this universe—yet without the pollution, the overcrowding, the disease, the war, the disasters, and all the greed and pride and abuse of power and more that has caused all that. It’s a pristine earth, with clear streams and clean air, beautiful flowers and grass and mountains and valleys and prairies and sunsets and twinkling stars. 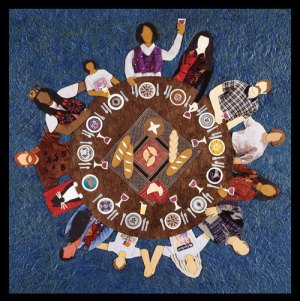 And at some point—again, not exactly sure what this looks like—I believe that God will resurrect us, bodily. We will live as we do now, as God intended us to live, but with bodies untouched by sin and death. We will plant gardens and make music and share meals and tell stories and live together in harmony—all peoples, every tribe and language and nation—with all creation, as God originally intended us to live.

Much of this imagining I get from stories of people who have had “near-death” experiences and from some of our poets and storytellers in the Christian tradition. J.R.R. Tolkien and C.S. Lewis have been especially influential for me in my imagination of life after death and life after life after death.

I think, for example of Tolkien’s description of Frodo waking up in Minas Tirith after destroying the ring in Mount Doom—that’s how I imagine what happens immediately after death, waking up in Jesus’ presence. And then I imagine the new creation being like Frodo and Sam being back in the Shire, enjoying again the simple pleasures of tilled earth and good companions, but without the threat of evil from the East. Or, I’ve always had a soft spot for Lewis’ description of “heaven” in The Last Battle: just like this earth, only brighter, the colours purer, and with worlds upon worlds to explore “further up and further in!”

Maybe this is too many words. Or maybe it’s too much speculation. But the biblical descriptions of what happens after death do lend themselves to using our imaginations—always remembering, of course, that God “is able to accomplish abundantly far more than all we can ask or imagine” (Ephesians 3:20), and that “no eye has seen, nor ear heard, nor the human heart conceived, what God has prepared for those who love God” (1 Corinthians 2:9). This is in many ways the basis for my hope for “heaven”—that God has given us deep desires to live, to flourish in life here on this good earth, and so God will fulfill those desires beyond our best dreams.