It’s an appeal for unity that sounds tailor-made for polarized congregations today. Churches are divided over LGBTQ+ inclusion, COVID precautions, rights and freedoms, penal substitution, critical race theory… It feels like too many things to name.

When we hear this appeal to “be of the same mind,” we probably think this means being in agreement about a set of beliefs or having the same positions on the important issues of the day. For many of us, this is what unity in the church looks like: it’s when everyone fully agrees on crucial doctrines or pressing social issues.

When there is disunity, then (meaning divisive disagreement on positions or beliefs), the typical appeal is for each side to listen to the other, to understand the other’s point of view, even to seek a compromise position or “middle way” (sometimes mistakenly labeled a “third way”—more on this later). In this understanding, both sides need to give a little if there’s going to be unity.

Of course, there’s nothing wrong with listening to others and trying hard to understand their point of view. In fact, that’s crucial to living well with each other in any community. That’s also how we learn and grow.

But I’d like to suggest a different way of understanding unity, a reframing of unity that is better rooted in Paul’s language of being “of the same mind.”

Because here’s the thing: Paul never calls on divided congregations to come to a middle-ground compromise. Even more, Paul’s language of “being of the same mind” is not about “thinking the same way about doctrine or issues.” Rather, it’s about having a particular kind of “mind”: the “mind of Christ.”

The “one mind” we are to be “in accord” with is the “mind”—the way of thinking and living, the way of being—which Jesus displayed. “Let this mind be in you which was in Christ Jesus,” Paul says (Phil 2:5)—and then goes on to describe what this “mind of Christ” is.

This “mind of Christ” is a way of being that divests ourselves of our individual power and privilege for the good of others, just as Jesus “emptied himself” of his divine status and prerogatives in becoming human for our liberation (2:5-7).

This “mind of Christ” is a way of being that enters into the life and suffering of the most disempowered and underprivileged, just as Jesus “took on the form of a slave” and even died a slave’s death, a conquered and oppressed people’s death—“death on a cross” (2:7-8).

This “mind of Christ” is a way of being that does all this to bring about a divine reversal, where those who have experienced oppression by the powers of our age enter with Jesus into his resurrection life and glorious exaltation (2:9-11). 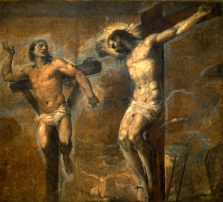 Titian, Christ and the Good Thief

Being “united in Christ” is about our shared commitment to walk together in the way of Jesus, his liberating way of love. We are united in Christ when we commit together to hold our power lightly in our interactions with each other, to walk in humility and patience, kindness and compassion, with those who are different from us, especially with those who hold less power or privilege than we do. We are united in Christ when we commit together to pay attention to the marginalized and disempowered among us and around us, to walk in solidarity with these considered “last,” “least,” or “lost” in society toward justice and peace and flourishing life. This is “the Spirit of Christ” in which we are united, the Spirit who shapes us individually and collectively into the image of Jesus Christ.

Rather than asking two opposing “sides” in a congregation to get together and find a compromise position for the sake of unity, we’d be much better off with the whole congregation asking a few pointed questions:

When this is our shared stance, our shared way of thinking and living, our shared way of being—our “one mind”—then we can truly say we have discovered “unity in Christ.” May we, like Paul, “press on to make this our own, because Christ Jesus has made us his own” (Phil 3:12).

Edited since originally posted. For some thoughts on parallels in other Pauline letters, including thoughts on how diversity works within this unity, see my comment below.