If you confess with your lips that Jesus is Lord and believe in your heart that God raised him from the dead, you will be saved. For one believes with the heart and so is justified, and one confesses with the mouth and so is saved. (Romans 10:9-10)

This is one of those classic evangelistic texts, the kind that get painted on signs and propped up on billboards, like John 3:16. It’s a gospel text, a mission text, a conversion text: it gets right down to the core of what we should believe, and it promises salvation for those who do.

The problem is, that’s not what these verses actually say.

Check it out again: “if you confess that Jesus is Lord and believe that God raised him from the dead, you will be saved.”

No mention of sin.

No mention of Jesus as personal Saviour.

No mention of the cross at all, let alone of Jesus dying on the cross for our sins.

Paul does talk elsewhere about some of these things. Sin and the cross are even pretty important to Paul. But why doesn’t Paul specifically mention them here, in this “classic evangelistic text”? How exactly can this particular “confession” and “belief” bring about “salvation”?

“You will be saved…”

Well, to make sense of this the first thing we have to get right is what Paul means by “salvation.” And to get that right, we need to go back to Paul’s Scriptures, our Old Testament. And a good place to start there is with the biblical writings Paul most quotes here in Romans 10: Deuteronomy and Isaiah.

Take Deuteronomy 30. Moses is speaking to the ancient Israelites before they enter into the Promised Land. Through Moses God promises to bring the Israelites blessings and life if they keep the commandments of the covenant. But God also warns them of curses and death if they disobey—in particular, being conquered by foreign armies and being sent into exile among the nations.

And then Moses makes this prediction: Israel will in fact fail to keep the covenant (which they did), they will be exiled (which they were), but if they return to the Lord they will be “saved”—they will be rescued from their exile and restored to their land to thrive once again.

This, then, is “salvation” according to Deuteronomy. Salvation is about God delivering God’s people from the powers of the world that have oppressed them, restoring them after they have experienced the consequences of their collective sin, bringing them back to where they can again experience life and liberty. 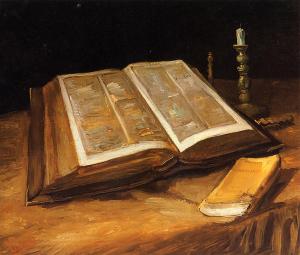 Then take Isaiah 52. Isaiah speaks of God’s “messenger” who announces God’s “salvation”: “How beautiful are the feet of those who announce peace, who bring good news, who announce salvation, who say to Zion, ‘Your God reigns!’”

This, like Moses’ promise of God’s future salvation, is a message of salvation to the exiled people of Israel a few hundred years before Christ, scattered as slaves and refugees throughout the world. And the message of salvation is this: God is returning to his throne to reign over all, and God’s reign will bring peace and justice once again for God’s people.

Now back to Romans 10. This is what Paul is talking about when he talks about “salvation”: he’s referring to Israel’s promised salvation, drawing on these and other Old Testament passages.

But Paul says something new, something completely unexpected. He says this promised salvation is not just for Israel, but it’s also for the nations, for the Gentiles—for everyone. As he puts it: “For there is no distinction between Jew and Greek; the same Lord is Lord of all and is generous to all who call on him. For, ‘Everyone who calls on the name of the Lord shall be saved.’”

This, then, is the salvation that Paul promises to those who confess and believe: God’s reign of justice and peace has arrived through Jesus, bringing deliverance from oppressive powers and restoration to flourishing life.

“…if you confess and believe.”

But what does it mean then to “confess that Jesus is Lord”? What does it mean to “believe that God raised him from the dead”? And how does this confession and belief bring about that salvation? To get at these questions we need to put ourselves in the sandals of those first Christians in Rome.

For us, it seems pretty simple to say, “Jesus is Lord.” But for those first Christians in Rome, confessing that “Jesus is Lord” was not mere words.

No, in Paul’s day, to confess that “Jesus is Lord” was a bold declaration of allegiance.

As Paul points out in 1 Corinthians 8, there were many “lords” and “gods” in the ancient world, many “powers that be” that called for allegiance. And at the very top of the heap, king of the castle, was the Roman Emperor, Caesar. For good Romans—and anyone who cared about their lives—this was one of the most self-evident truths around: Caesar is Lord, master over any and all other powers that be. For them, this was the most fundamental confession: “Caesar is Lord.”

So to confess that “Jesus is Lord” was potentially a dangerous act, a revolutionary act, a radical commitment. It wasn’t something that slipped easily off the lips. This explains why Paul can say in 1 Corinthians 12, “No one can say ‘Jesus is Lord’ except by the Holy Spirit”—you would need the Spirit’s boldness to confess such a thing!

He is Lord over any and all other lords and gods, any other powers that be in the world: whether Caesar or the President or Prime Minister Trudeau, whether nation states or church structures or social norms, whether Supreme Courts or vigilante militias, whether ISIS or the UN, whether constitutions or confessions of faith, whether the boss at work or the bully in the playground.

Any power at work in the world you can think of, Jesus is Lord over it.

Jesus is Lord over all—and so Jesus commands our ultimate allegiance.

But Jesus is not like any other powers that be, whether back then or today. And that’s where the next part comes in: “believe in your heart that God raised him from the dead.”

Our Lord that we confess, the One to whom we hold fast with total allegiance, is a man who was executed by the powers that be, but was vindicated by God by raising him from the dead. 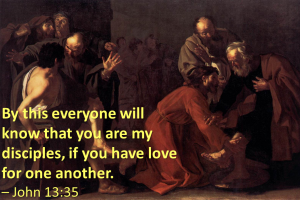 So we confess that “Jesus is Lord,” Jesus is Master over all, including us. But we follow a Lord who gave himself for us. We obey a Master who taught us to love one another, and who showed us what that love looks like. And we follow this Lord and Master because he is the one whom God has given his “Yes” to, he is the one whom God has stamped with his full approval, confirming that Jesus’ way is the only way to true blessing and real life.

It’s easy to say the words, “Jesus is Lord.” But it’s hard to truly “confess that Jesus is Lord,” that the way of Jesus is the only way to true life, and so we need to commit ourselves fully to Jesus’ way of self-giving love.

But that’s what it means to “confess that Jesus is Lord.”

But that’s what it means to “believe that God raised Jesus from the dead.”

This post is adapted from my sermon at Morden Mennonite Church on February 14, 2016. Cross-posted from http://www.mordenmennonitechurch.wordpress.com. © Michael W. Pahl