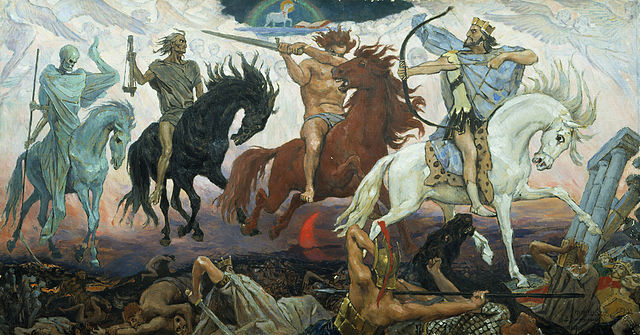 Revelation 6, the Four Horsemen of the Apocalypse: domination, war, economic injustice, and death.

Revelation 12-13, the Dragon and his Two Beasts: persecution, suffering, martyrdom for those who follow Jesus.

Revelation 15-16, the Seven Bowls of Wrath: the earth, the rivers, the seas, the skies, all touched with degradation and devastation, and death, always more death.

It’s only in the White West where we have had the luxury of being able to imagine these horrors as something still future, some future seven-year tribulation. But tell that to the 40 million who died in ancient China’s Three Kingdoms War, or the tens of millions—half Europe’s population—who succumbed to the Black Death in the Middle Ages, or the millions of indigenous persons swept under the first waves of conquering Europeans, or the millions who perished in the Bengal Famine of 1770, or the tens of thousands of Christians killed for their faith each year around the world.

There is no need to imagine all this as some future tribulation. This has been the human experience throughout our history. It was, it is, and it is to come.

This can be hard to accept on its own, but there’s something else that makes all this even more difficult to accept for us as Christians: Revelation, and indeed several passages in the Bible, describe many of these horrific realities as divine judgment.

But does God, in righteous wrath against sin, actually employ violence and destruction and death to exact judgment, to bring about justice? If so, how do we reconcile that with Jesus’ call to nonviolence, to love our enemies, to forgive seventy times seven times? And if not, how do we make sense of this kind of language in Revelation, or even elsewhere in the Bible?

There are several things in Revelation that suggest that all this is more complex than it first seems, and that notions of God seeking “retributive justice” or using “redemptive violence” are missing the point of Revelation’s language of divine judgment.

Yes, God judges human sin—but not by zapping us with lightning bolts of violence, not by doling out destruction with one hand and death with the other.

Let’s start with the first major vision of Revelation, Revelation 4-5. This vision sets the stage for everything else that follows in Revelation. It sets the tone for how we should imagine Jesus and God. And there God reigns through Jesus, and Jesus is the Lion of Judah—Israel’s Messiah—who reigns as the Lamb who has been slain.

Jesus does not reign as a tyrant, as a bully, as a cruel and violent despot. Jesus reigns as the one who is willing to die rather than kill, who rejects violence and coercion as the path to justice and peace.

This should sit like a burr in our brain, making us uncomfortable with connecting all these horrific things on earth with God’s reign from heaven.

Then look ahead to one of the last major visions of Revelation, the judgment scene in Revelation 20. There we have another clue that things are not as they seem. There, at the end of God’s judgment of all things, we are told that “Death and Hades” are themselves condemned and eradicated. To put this into Paul’s words in 1 Corinthians 15, “The last enemy to be destroyed is death.”

God does not deal in death; God is out to destroy it.

In short, both the first major vision of Revelation and one of the last visions highlight one crucial fact: violence and injustice and suffering and death are not the way of God, but they are the very enemies of God which God is seeking to eliminate.

So how do we make sense of all the visions in between that seem to say the opposite?

Think of those Four Horsemen of Revelation 6: domination, war, economic injustice, and death. Although these are portrayed as coming at the call of heaven, they are thoroughly human evils, originating in our own human greed and cruelty and reflecting a pattern seen throughout human history.

The same assessment could be made of all the expressions of “God’s wrath” in Revelation. Not just the killing and wars, but even the famines and diseases and degradations of the earth, the sea, and the skies—these are caused by human action, human harm, human sin. These are not “God directly inflicting punishment,” but rather “God giving people up to the consequences of their sinful actions.”

This is exactly how Paul describes “God’s wrath” in Romans 1. Paul says that “the wrath of God is revealed from heaven against all ungodliness and wickedness.” And how is that “wrath of God” revealed? Paul goes on: by God “giving us over” to our sins, to experience the full impact of our own destructive attitudes and actions.

No wonder Revelation repeatedly calls on humans to repent.

Then take a look at the two beasts of Revelation 13. Revelation scholars agree that these beasts do not represent specific human leaders (e.g. Nicolae Carpathia) but rather the Roman empire and its imperial cult. These beasts, in other words, are human structures and systems of power gone wrong.

Our human structures for organizing society—our political structures, our economic systems, our religious structures—these can become inhuman, corrupt and cruel, perpetuating injustice and bringing more death than life. At that point, these “powers that be” become “evil powers.” They become beasts.

These beasts, then, and the diabolical ethos that animates them, are not God’s creation. God does not make them. They are not God’s instruments. God does not use them. They are God’s enemies. In fact, we discover by the end of Revelation that the devil and his beasts, all these evil “powers that be,” face the same fate as “Death and Hades”: they are condemned and eradicated.

Evil is not God’s instrument; it is God’s enemy.

This way of understanding Revelation is both comforting and disturbing.

It is comforting to know that God does not use violence and destruction and death at all, even to bring about good. As John 10 says, it is the thief who seeks to steal and kill and destroy, not Jesus—Jesus brings life. If there is anything that brings hurt or harm, damage or devastation or death, that thing is decidedly not-God.

And this means there is more than meets the eye in Revelation. All those depictions of God’s judgment being a sort of violent vengeance, a kind of retribution, cannot mean what we think they mean at first glance. God is out to eliminate human sin, evil powers, even death itself—but not human persons. As Ephesians 6 puts it, “our battle is not against flesh and blood, but against the rulers, against the authorities, against the cosmic powers of this present darkness.”

Yet in another way, all this is very disturbing. For it means that we are our own worst enemy. Our selfishness, our self-indulgence, our unbridled aggression, our prejudice, our capacity for cruelty, our political oppression, our corporate greed—this is what lies behind so much of the violence and death our world experiences, the degradation and devastation even of the earth itself.

This is the judgment of God. This is God’s assessment of the human predicament.

Hear, then, what the Spirit is saying to us. Hear the call of God for us to repent, to “come out of Babylon and not take part in her sins,” to resist the lure of our world’s “powers that be” gone wrong, to say a firm “No!” to the corruption and injustice and oppression of human structures of power gone bad. Hear the call of Jesus the Lamb to follow him in his cross-shaped footsteps, his footsteps of selfless self-giving for the good of the other, for the good of all, even in the face of death.

In this is the salvation of God. This is the path to the kingdom of God, God’s reign of justice and peace and flourishing life.

Here’s the next post in this series on Revelation: “The (S)Word-Wielder”

This post is adapted from a sermon preached at Morden Mennonite on April 17, 2016. The first image is a painting by Viktor Vasnetsov. All other images are from a mandala of Revelation 4-5 created by Margie Hildebrand. Cross-posted from http://www.mordenmennonitechurch.wordpress.com. © Michael W. Pahl.